This second segment, of the three part series on the history of workers’ compensation law, briefly summarizes how the industrial revolution fueled the workers’ compensation system. The first resemblances of workers’ compensation insurance coverage primarily arose because of increased revolutionized industrial practices and socialist schisms in European political ideals. Around the 1860s, the industrial revolution was beginning to take hold in Europe; the American Industrial Revolution area would steam forward in the later part of the 1800s. Industrial imperial countries, specifically Germany, wrestled with growing the economics of their respective country while continuing to expand their empires. To achieve these goals, political leaders were required to balance the progressive social worker-centered ideals and traditional conservative business goals. 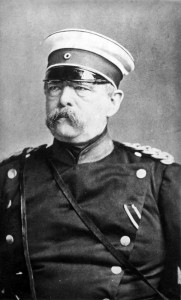 the benchmark standards for workers’ rights in Germany in the early 1870s. Gregory Guyton explained that, although Bismarck was not a benevolent leader, the legislation passed under his tenure resulted from a compromise between traditional views on industry and the increasing pressures from the growing Marxist movement.  Bismarck spearheaded the Employer’s Liability Law of 1871 extending legal protection to workers in specific labor areas including mines and railroads. In 1884, Germany adopted the Workers’ Accident Insurance Act. It provided pensions to those unable to work because of non-occupational causes. The subsequent Public Aid Act provided disability benefits for workers unable to work as a result of an on-the-job injury.

By virtue of creating a monetary distribution system for injured workers, Otto von Bismarck’s movement also created immunity for employers from civil lawsuits. This was a divergent political and legal shift from the ideals of the popular socialist political camp. Hence, the early workers’ compensation laws contained the exclusivity of remedies similar to what can be found in today’s statutes. Alan Pierce, Workers’ Compensation in the United States: The First 100 Years (Lexis Nexis 2011).

As the industrial revolution grew in America in the 1880s, so did public awareness of the unsafe work conditions faced by the daily laborer. In 1906, a socialist political activist, Upton Sinclair, published the graphic novel expose’ The Jungle. The novel, which followed a family of immigrants working the Chicago slaughter houses and exposed the horrific working conditions, gained ubiquitous attention amongst progressives. In the wake of The Jungle, the U.S. Congress passed several federal laws aimed to protect the public working class and general consumers, including the Food and Drug Act of 1906.

Still, little was done in terms of workers’ compensation insurance coverage in America. Common law tort liability in civil courts was the only remedy available to a worker injured in the course of employment. The American legal system posed challenges to immigrant workers such as procedural and language barriers. An employer could still raise the defense of assumption of risk or contributory negligence as a bar to any momentary recovery an injured worker could be entitled to. In his article, Guyton points out that the federal Congress acted by passing laws such as the Employer’s Liability Act in 1906 and 1907. The Acts respectively mitigated the harsh contributory negligence laws.

Following this Congressional intervention into an otherwise laissez-faire American capitalism culture, several states including New York and Massachusetts attempted to pass state based workers’ compensation reform laws. These reformations ultimately failed. However, President, later Supreme Court Justice, Howard Taft acted upon entering office. Taft signed into law the Employer’s Liability Act of 1908. The purpose of the act was to protect railroad workers’ engaged in interstate commerce. Each state developed independent commissions on how to address the liability for an injury. Private agreements between employers and workers lead to contractual obligations for employers to pay medical expenses for on the job injuries while workers’ waived their right to sue in civil tort. It was in this climate that the workers’ compensation system based in state law arose in 1911, which will be the subject of the next article.