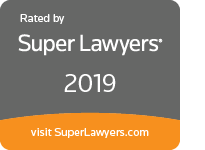 Lee & Brown LLC, is pleased to announce all 5 Members, Katherine M. Lee, Joshua D. Brown, Karen Gail Treece, Joseph Gren and John Abraham, have been selected by Super Lawyers for 2019. Mr. Abraham joins the team for the first year as a Rising Star.  Super Lawyers evaluates lawyers across the country for its annual list of top attorneys.  Each candidate is measured against 12 indicators of peer recognition and professional achievement. Lee & Brown is very proud of the recognition.

death claim in Ordonez-Gamez v. SkyWest Airlines, Inc., W.C. No. 5-079-980. The Decedent was staying at a hotel in Denver for flight training and was in travel status during this period.  One evening, after completing a difficult test, the Decedent went out drinking with a co-pilot. Before returning to his hotel, while heavily intoxicated, the Decedent ran into a busy road and was struck by a car.  The Decedent’s Counsel argued that he intended to return to his hotel room but was heading in the wrong direction because he was confused. Respondents successfully argued that the Decedent was on a personal deviation from travel status when he went out drinking. Decedent had not returned to the course and scope of employment at the time of his death because he was heading away from his hotel. The ALJ found that the intention to eventually return to a hotel room was not sufficient to end a deviation and specific travel away from the hotel continued the personal deviation.

Member Karen Gail Treece  successfully defended Claimant’s Appeal in Pickering v. Hercules Commercial, W.C. No. 5-049-650. Claimant alleged he injured his right shoulder while tightening a bolt using an allen/hex wrench. The ALJ denied and dismissed the claim. Claimant complained of pain and was on light duty prior to the alleged date of injury. The ALJ relied upon testimony from Respondents’ expert that it was unlikely a person could exert sufficient force, using a ¼ inch hex wrench, to sustain a significant shoulder injury.  The Claimant appealed. Upon appeal, the Panel found the evidence supported the ALJ’s findings and affirmed.

Associate Jessica Melson was successful in defeating a full contest claim in Aragon v. Costco Wholesale, Inc. W.C. No. 5-073-284. Claimant alleged she injured her neck by lifting a box of bagels overhead while working in the cooler. Ms. Melson elicited inconsistent testimony from Claimant that she first reported the onset of symptoms occurring over several months before the alleged injury, but testified she heard a pop in her neck on the day of the incident. Respondents’ expert credibly testified that Claimant’s pathology, and need for medical treatment, were related to preexisting degenerative conditions. The onset of symptoms was due to the natural progression of the preexisting conditions. The described mechanism of injury would not cause an injury to the cervical spine. The ALJ denied and dismissed the claim.

Intermittent FMLA leave is a giant thorn in the side of human resource professionals across the country. The struggle is that not all intermittent leave requests are equal. Here’s a look at some of the most common scenarios and how to handle them. The FMLA allows employers some flexibility in granting different kinds of intermittent leave. Employees are entitled to take it for serious health conditions, either their own or those of immediate family members. The law also allows use of intermittent leave for child care after the birth or placement of an adopted child, but only if the employer agrees to it. It’s the company’s call. It’s not always simple, however; if the mother develops complications from childbirth, or the infant is born premature and suffers from health problems, the “serious health condition” qualifier would likely kick in. As always, it pays to know the medical details before making a decision.   Continue reading this article
Cases You Should Know
Even an ALJ has Limits: In Burren v. ICAO, 2019 COA 37, (March 7, 2019), Claimant sought review of an ALJ’s determination of the date she reached MMI despite there being no finding of MMI by an ATP or DIME physician. Respondents requested a 24-month DIME pursuant to C.R.S § 8-42-107(8)(b)(II), because no treating physician had placed Claimant at MMI in the two years that had elapsed since the date of the work-related injury. The DIME physician opined that Claimant was not at MMI.  Respondents applied for a hearing to overcome the DIME opinion.  The ALJ at the administrative hearing found the Claimant was at MMI.  Upon review, the Panel upheld the ALJ’s Order, concluding that substantial evidence supported the decision.  On appeal, the Colorado Court of Appeals concluded that an ALJ cannot determine MMI when neither a treating physician nor a DIME physician had placed the injured worker at MMI. The Order was set aside and the matter was remanded for the ALJ to enter an order consistent with the Court of Appeals opinion.
Moral of the Story: If neither the ATP nor the DIME physician have found Claimant to be at MMI, an ALJ may not rule a Claimant is.
No Show No TTD: In Willhoit v. ICAO, 2018CA1523 (Feb 14, 2019)(nfsp), Claimant sought review of a Panel decision affirming an ALJ’s Order denying and dismissing his claim for TTD benefits. Claimant sustained an industrial injury that prevented him from performing his essential job functions on July 31, 2017. Claimant stopped working and the employer began paying TTD benefits.   On August 30, 2017, the Employer sent Claimant an offer of modified employment complying with Claimant’s work restrictions.  The offer of modified employment was signed by Claimant’s treating physician.  Claimant failed to show up for work as scheduled. Claimant failed to show up for the following three days.  The employer discontinued Claimant’s TTD benefits pursuant to C.R.S. § 8-42-105(3)(d)(I).  Claimant sought a hearing to reinstate his TTD benefits on the grounds that the modified job offer did not comply with his restrictions. The ALJ denied and dismissed Claimant’s claim for benefits.  On review, the Panel affirmed the ALJ’s opinion.  On appeal, the Court of Appeals stated that when a Claimant is released to modified duty but fails to appear for work, Respondents may unilaterally terminate temporary disability benefits pursuant to C.R.S. § 8-42-105(3)(d)(I).   Neither the statute nor W.C.R.P. 6-1(A)(4) requires that a written offer of modified employment detail every aspect of how a job will be modified.  The Court of Appeals affirmed the Orders of the ALJ and the Panel.

Moral of the story: Respondents may unilaterally terminate TTD benefits when Claimant is released to modified duty but fails to appear for work.

Preexisting Condition is not a Conditional DQ: In Wojciuk v. Public Partnerships Colorado, W.C. No. 5-007-181 (March 4, 2019), Respondents’ sought review of an Order finding Claimant’s knee injury compensable. Claimant was working for the employer as an in-home caregiver.  While lifting a patient, Claimant felt immediate pain in her right knee. Of note, Claimant had preexisting arthritis in her right knee. Claimant initially treated but did not initially report the injury.  At the initial hearing, the ALJ found that Claimant’s pre-existing arthritis became symptomatic while she was doing a heavy lift and was a direct result of her job duties.  The ALJ determined that there was a compensable aggravation of her knee condition.  The Panel upheld the ALJ’s Order as the findings were supported by substantial evidence.

Moral of Story:  A preexisting condition does not disqualify a Claimant from receiving workers’ compensation benefits.