It is with great pride that we announce the Attorneys of Lee & Brown, LLC, who have been selected by their peers for inclusion in The Best Lawyers in America 2020® in the field of Workers’ Compensation Law – Employers. 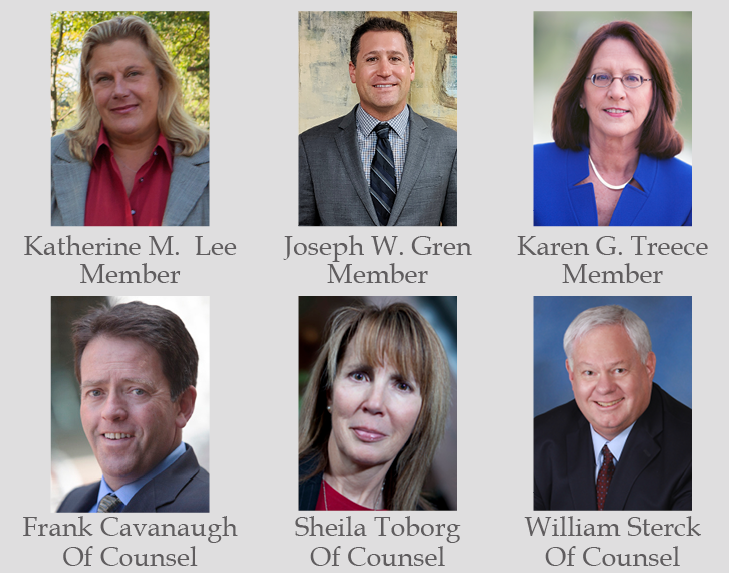 In Metcalf v. Caterpillar Incorporated Co., Of Counsel Sheila Toborg and Of Counsel William Sterck successfully defended  against Claimant’s claim of compensability. Claimant argued that she sustained a compensable injury and that she was entitled to medical care, temporary total disability benefits, and temporary partial disability benefits. During hearing, Ms. Toborg argued, and presented evidence, that the Claimant did not

establish she sustained an injury in the course and scope of her employment and that the Claimant’s condition was not an occupational disease, but rather the result of trauma. Mr. Sterck further argued, in Respondents’ Position Statement, that Claimant had no basis for her claim in either law or in fact.  Due to the combined efforts of Ms. Toborg and Mr. Sterck, the ALJ found that Claimant failed to meet her burden of proving her claim compensable and the claim was dismissed.

Before The Industrial Commission of Arizona, Associate Daniel Mowrey successfully defended Claimant’s Appeal in Szach v. SW Ambulance, ICA No. 20160-260291.  Claimant protested the closure of his claim and sought continuing medical benefits. Claimant also sought to link upper body injury and subsequent surgery to the admitted claim.  The ALJ relied upon testimony from Respondents’ medical expert, who opined that the upper body injury and subsequent surgery was not related to the admitted knee injury.  The ALJ denied and dismissed the claim. The Claimant appealed. Upon appeal, the Panel found the evidence supported the ALJ’s findings and affirmed.

Also before The Industrial Commission of Arizona, Associate Daniel Mowrey successfully defended against Claimant’s full contest claim in Selby v. Cornet Limited DBA Medstar, ICA No. 20180-70036.  Claimant alleged a traumatic hernia as a result of transferring a patient at work.  Mr. Mowrey elicited testimony from Claimant that he could not pinpoint the specific time or act which directly caused the hernia.  Claimant further admitted that he did not feel pain until 4:00 a.m. the next morning.  Mr. Mowrey argued that the testimony did not meet the requirements of a compensable hernia under A.R.S. Section 23-1043. The ALJ found the testimony and corresponding medical records did not meet the standard outlined in A.R.S. Section 23-1043 to establish an industrial hernia.  The ALJ denied and dismissed the claim.

Alligators, Burritos and Bears – Oh My!

Having litigated several “assault” cases, nothing ceases to amaze this author more than the vast number of unfortunate ways people find themselves in the most bizarre and unforeseeable situations. Courts across the United States adjudicating assault-based cases in the workers’ compensation context are faced with determining whether the events leading to the assault arose out of an injured workers’ employment or whether the event was purely personal in nature. Here are some of the more inexplicable events that could give rise to a claim — you decide whether these claims would be compensable. Continue reading the article
Cases You Should Know

Don’t FAL to Take Notice: In Dickens v. Wagner Equipment, No. 18CA1806 (June 20, 2019), Claimant sought review of a final Order by ICAO affirming the decision of an ALJ denying his Petition to Reopen and dismissing his claim for additional benefits. Claimant had sustained an admitted, compensable injury to his right knee in 2006 while working for Respondents. He underwent extensive authorized medical treatment and reached MMI in 2010. Because Claimant continued to experience pain, the claim was voluntarily reopened by Respondents. Claimant reached MMI a second time in August 2013 and Respondents filed a FAL based on the ATP finding Claimant at MMI. It was undisputed that neither Claimant, nor his Counsel, were properly served the 2013 FAL. Claimant’s Counsel eventually obtained a copy of the FAL directly from the Division on April 28, 2014. On May 22, 2014, within 30 days of receiving the FAL from the DOWC, Claimant filed an Objection to the FAL, but did not file an Application for Hearing at that time, as required by Section 8-43-203(2)(b)(II)(A), C.R.S. 2018. Instead, more than 30 days later, on June 23, 2014, Claimant filed an Application for Hearing on the sole issue of, “whether Respondent’s FAL was properly served, and if so, when and based upon such whether Claimant’s Objection was timely.” The matter was heard before an ALJ, who held that the claim had not closed because Claimant did not receive proper notice. Claimant filed another Application for Hearing on August 22, 2017, endorsing new issues not previously endorsed. Respondents argued that Claimant’s claim was closed by operation of law because Claimant failed to file within 30 days of receiving the FAL. The ALJ agreed and held Claimant’s claim automatically closed per statutory rules. Claimant appealed and the Colorado Court of Appeals held that the claim closed in 2014 when Claimant’s Counsel received actual notice of the FAL by obtaining a copy from the Division.  Because Claimant failed to file an Application for Hearing challenging the issues raised in the FAL within 30 days of receiving it, the claim closed.

Moral of the Story: The 30-day statutory time-frame for Claimant to file an Application for Hearing in connection with an objection to the FAL begins to run at the time of notice of the FAL. Even if initially improperly served, the time-frame begins when Claimant receives actual notice, or receipt of notice, of the FAL.

DIME flies when you are having fun: In Suomie v. Spectrum Retirement Communities, W.C. 5-050-347 (June 14, 2019), Claimant sought review of an Order that denied Claimant the statutory right to request a DIME.  Respondents filed a medica-only FAL in July 2017.  Because Claimant had lost no time as a result of the injury and received no impairment rating, no temporary benefits or PPD benefits were admitted on the FAL. Claimant objected to the FAL and sought a DIME. Respondents filed a Motion to Strike the DIME Application based on the finding of Loofburrow 320 P.3d 327 (Colo. 2014). The ALJ agreed with Respondents and struck the DIME Application, noting it was not ripe. Claimant appealed. The Panel disagreed with the ALJ’s finding that Claimant did not have a statutory right to a DIME. The Panel noted that the ALJ did not follow the proper legal standard for denial of a DIME as noted in Martinez v. Energy Savings Crew, LLC, W.C. No. 5-055-251 (May 31, 2019). The Panel did not follow the reasoning noted in Loofburrow because it involved a claim where no FAL was filed. The Panel held that a medical-only FAL has the same legal effectiveness as any other FAL and was sufficient to trigger the right to challenge an ATP’s decision through a DIME.

Moral of the Story: Filing any FAL triggers the statutory time requirements to request a DIME.  Even when a medical-only FAL has been filed, the claimant has a statutory right to a DIME.

The Penalty Box: In Conger v. Johnson Controls W.C. 4-981-806 (July 1, 2019), Respondents sought review of an ALJ’s Order requiring Respondents to pay penalties in the amount of $22,800. Respondents failed to timely authorize medical treatment, as Ordered by a prior ALJ, and thus were penalized for violation of said Order. The Panel, citing Supreme Court precedent holding that the correct test to determine whether a fine or penalty is excessive, is whether the amount of the fine is grossly disproportional to the gravity of the offense.  The Panel determined that the ALJ correctly determined, based upon the evidence, Respondents’ actions were objectively unreasonable in failing to provide the specific medical treatment noted in the Order. The Panel noted that the case highlighted the proportionality of penalties imposed for the gravity of the actions of the party. Here, the Panel applied the gross proportionality test in determining whether the penalties imposed by the ALJ on Respondents, were supported by substantial evidence of unreasonable conduct by Respondents in authorizing and paying for medical treatment. The Panel upheld the finding of the ALJ that the Respondents’ conduct in violation of the Order was objectively unreasonable, but remanded to the ALJ to review whether his finding of the amount of the penalty imposed was proportional to the harm, or risk of harm, by Respondents’ failure to comply with the Order.

Moral of the story: It is imperative to timely comply with court orders. Failure to comply with an order subjects respondents to potential penalties which are at the judge’s discretion and proportional to the offense.

Survey Says: “Compensable”:  In Olvera v. Air Cleansheen LLC, W.C. 5-073689 (June 4, 2019), Claimant sought review of an Order by an ALJ that denied compensability of the claim. Claimant worked for the employer laundering sheets and towels through a commercial laundry. The employer’s business provided clean linens to bed and breakfast locations. Claimant was injured in an automobile accident on November 8, 2017, while transporting the employer’s laundry in her car. While driving in what was deemed to be the course and scope of her employment, she was involved in auto accident when another driver ran a stop sign. Claimant reported the accident to her supervisor and went to the ER complaining of injuries to her back. Claimant’s treatment was paid for by the other driver’s auto insurance, but when those funds reached their policy limit, Claimant filed a workers’ compensation claim in April 2018. On the issue of compensability, the ALJ found that Claimant was not credible because of irregularities in her submitted evidence and held that she disclaimed and excluded any work relationship to her accident because she was not being truthful or credible, dismissing the claim. The ICAO held that the Findings of Fact did not support the ALJ’s Order under C.R.S. § 8-41-293(1)(a).  The Panel noted that the ALJ did not identify any statements that were not believed that would also support a denial of the claim’s compensability. They held that an employee who suffers a compensable injury at the hands of a third party can pursue remedies against the third person and also file a claim under the Workers’ Compensation Act.  The ALJ’s Order was set aside and the matter remanded for additional findings to determine compensability.

Moral of the Story: A claimant may file a workers’ compensation claim even if they have already pursued, and received, benefits from a third party.
in Blog / Firm Newsletters 0 comments
Share