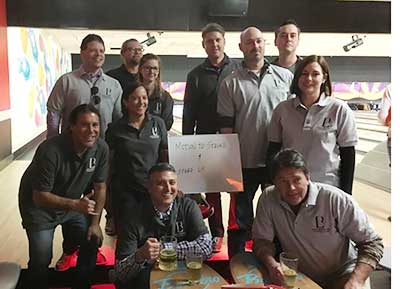 Lee & Brown LLC was a sponsor for the Professionals in Workers’ Compensation of Colorado annual bowling tournament. The PWC is a professional organization made up of third-party administrators, carriers, attorneys from both sides of the Bar, and professional vendors offering services in the industry. The PWC provides ongoing educational seminars pertaining to the workers’ compensation industry throughout the year. The PWC also funds two collegiate scholarships to high school students interested in studying an area connected to the industry. The PWC bowling tournament is one of the fundraising opportunities from which funding is provided for these scholarships. Lee & Brown fielded two teams this year including Members Joshua Brown and John Abraham; Of Counsel Frank Cavanaugh, M. Frances McCracken and Brad Hansen; and Associates Matt Boatwright, Jessica Melson, and Angela Lavery. A great time was had by all for a good cause while fostering professional development and connections in the Colorado Workers’ Compensation community.

Associate Daniel Mowrey successfully defended Claimant’s request to reopen his Arizona claim and add an additional body part in Szach v. SW Ambulance, ICA No. 20160-260291. Claimant sustained an admitted industrial injury on January 12, 2016. The Claimant was placed at stationary status and provided with no impairment rating or ongoing treatment on April 2, 2018. Claimant protested the closure of his claim and sought continuing medical benefits and/or an increased impairment rating. Claimant also sought to link an upper body injury and subsequent surgery to the admitted claim. The ALJ credited the testimony of Respondents’ medical expert, who opined that the upper body injury and subsequent surgery was not related to Claimant’s admitted injury. Respondents’ medical expert further credibly testified that Claimant required no additional medical care for his admitted injury. Respondents also presented medical evidence of a preexisting upper body injury. The ALJ concluded that, based on the objective medical evidence and the credible opinion of Respondents’ expert, Claimant failed to demonstrate by a preponderance of the evidence that he was entitled to an increase in permanent impairment or additional medical care. The ALJ further opined that the upper body injury was not related to the admitted injury. The ALJ ordered Claimant’s claim for additional benefits be denied and dismissed.

Moral of the story: The Employer’s First Report of Injury is not a substitute for, or the equivalent of, a claimant filing a Workers’ Claim for Compensation. A claimant must timely file a claim in order to comply with C.R.S § 8-43-103 (2), otherwise his or her workers’ compensation claim is barred by the statute of limitations.

Safety Rule Violations: In Heien v. DW Crossland LLC, W.C. No. 5-059-799 (November 29, 2018), Claimant sought to overcome an Order reducing the non-medical workers’ compensation benefits by 50% for his willful violation to obey a safety rule. In this case, the Employer had an established safety rule that employees were not to open washing machines while the spin cycle was ongoing. Claimant sustained a severe amputation injury to his right arm when he violated the Employer’s safety rule by opening a washing machine while it was still running. Claimant admitted to using heroin during his shift and stated he opened the machine to retrieve a Coca-Cola bottle as he was concerned the sheets being washed would be damaged. The Administrative Law Judge (ALJ) reduced Claimant’s non-medical workers’ compensation benefits by 50% to account for his willful failure to obey a safety rule. Claimant appealed this reduction in benefits by arguing that his violation of the safety rule was not willful because he had a plausible purpose in violating the safety rule. Additionally, he argued that the safety rule was not enforced by the Employer. ICAO affirmed the ALJ’s finding that the Employer’s safety rule was enforced because there were posted warning signs above the washing machine and there was a switch located directly beside the machine that could be pulled to immediately cut power to the machine. The Panel noted the obviousness of the risk in affirming the ALJ’s finding that Claimant’s effort to save sheets from being damaged was not a plausible purpose for violating the enforced safety rule.