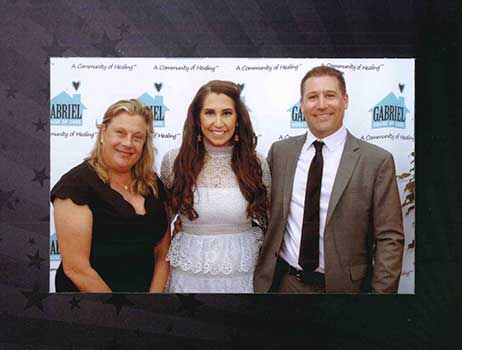 L & B Members Katherine Lee and Joe Gren (pictured with Liberty Mutual adjuster Brittany Pintor) were honored to attend the premier of the movie “Two Hearts”  based upon the book “All My Tomorrows.”  The book was written by a Firm client after he suffered the tragic loss of his son.  Both the book and the movie detail the emotional story behind the donor family’s decision and the lives, forever changed, of the recipients and their families. The premier also included a tour of The Gabriel House of Care, built in large part from a donation by one of the organ recipients.  The Gabriel House of Care houses individuals waiting for or recovering from organ transplants, and is conveniently located steps from the Jacksonville, Florida Mayo Transplant Clinic.  Katherine and Joe were honored to be included as guests, and learned a great deal about the gift of organ donation, which inspired a Firm contribution to an amazing and transformative cause.

successfully defended Claimant’s pursuit of specific medical benefits.  Claimant was employed by Global Medical Response as a paramedic for over 20 years, when he slipped and fell down icy stairs in April 2018.  Following the injury, Claimant underwent extensive cervical and lumbar spine surgeries.  Respondents defended against causation and relatedness based on pre-existing injuries and Claimant’s failure to timely report head and neck symptoms to his ATP.  Claimant argued that the fall had aggravated preexisting injuries that were work related, and that his ATP failed to document his cervical spine complaints.  The ALJ denied Claimant’s request for reimbursement for both surgeries.  He found that the cervical spine surgery was not causally related to the workplace injury, but that it was a prophylactic measure related to both Claimant’s degenerative conditions and a preexisting injury.  He also found that the lumbar spine surgery, although reasonable and necessary, was not causally related to the workplace injury because Claimant had a history of lumbar spine complaints and failed to prove that the workplace injury caused an aggravation of same.

in Mahoney v. Evraz, W.C. No. 5-084-115.  Claimant alleged an injury to his hip from operation of a cutoff machine while pulling large pieces of pipe down the table.  Claimant made several inconsistent statements to his treating providers, his employer, and to the ALJ.  Respondents’ expert credibly testified that the alleged mechanism of injury would not cause Claimant’s injury.  Respondents’ expert also opined that the cause of Claimant’s symptoms was due to an unrelated condition known as meralgia paresthetica.  The ALJ found Respondents’ expert credible and found Claimant not credible. Hence, the ALJ denied and dismissed Claimant’s claim for compensation.

Associate Matt Boatwrightsuccessfully defended a full contest claim in Rose v. Allied Universal, W.C. No. 5-070-620. Claimant claimed that she suffered a knee injury while running to board a train as part of her duties as a security guard.  Claimant had a medical history involving treatment for the same knee prior to the work injury that was not disclosed to the treating provider.  Claimant later disclosed the treatment but gave multiple different accounts of how the preexisting condition arose. Respondents’ expert opined that the alleged mechanism simply was not sufficient to have caused the injuries for which Claimant sought treatment.  The ALJ ultimately found that, while Claimant did experience pain after the event in question, Claimant did not suffer an injury that arose out of and occurred within the course and scope of employment. The ALJ cited inconsistencies in the records that could not be reconciled with testimony. The claim was denied and dismissed.

Associate Matt Boatwrightalso successfully defended against a claim for conversion from an upper extremity impairment to a whole person rating in Tucker v. United Natural Foods Incorporated, W.C. No. 5-043-659. Claimant claimed that he suffered injuries to his neck as part of his work-related shoulder injury that warranted conversion to a whole person impairment.  Claimant had ongoing treatment involving his cervical spine.  While the ALJ did find that Claimant suffered functional loss in the shoulder, he found that the limitations were confined to that body part and did not extend to his neck.  The ALJ found that Claimant had failed to prove that complaints of neck pain and dysfunction arose to the level of functional impairment to that body part.  Accordingly, the ALJ denied Claimant’s request for conversion.

It’s All Fun and Games – Even if You Get Hurt: In Schniedwind v. Rite of Passage, W.C. No. 5-051-507-03 (March 12, 2019), Claimant worked as a licensed therapist for the employer. She alleged she sustained a work-related injury riding a bicycle while accompanying a team of students. The ALJ found the cycling excursion was a recreational activity. Additionally, the ALJ held that, although Claimant’s participation in the ride conferred a benefit to the employer, her injuries were not compensable because her participation in the activity was voluntary. The panel upheld the ALJ’s Order as the findings were supported by substantial evidence.

Seconds Anyone?: In Davoli v. University of Colorado, W.C. No. 5-068-419-001 (March 15, 2019), Claimant sustained an admitted head injury when she hit her head on a counter.  While receiving treatment for the admitted claim, Claimant hit her head again on an x-ray machine at work.  The second incident was treated under the first admitted claim and there was no lost time associated with the second incident.  The ATP was aware of both events and opined that the diagnosis and treatment remained the same.  Respondents never filed a second claim for the second incident.  The parties went to hearing on the second claim for compensability and benefits.  The ALJ found that since there was no lost time, no permanent impairment, and the claim was administered under the first injury, the claim was denied.  On review, ICAO remanded the case for further findings indicating that the claimant suffered a compensable injury if the second incident of hitting her head on the X-ray machine caused the need for medical treatment or disability.

Moral of the story:  If a new incident aggravates, accelerates, or combines with a pre-existing injury and causes the need for medical treatment, a second claim should be filed – even if there is no resulting disability.

FAL the Void: In Martin v. Jack in the Box d/b/a Qdoba Mexican Grill, W.C. No. 4-968-114-01 (March 15, 2019), Claimant sought review of an Order that denied and dismissed his claim and ordered that the FAL was void ab initio. To deem the FAL void ab initio would mean the document was never filed. Claimant was assaulted behind the restaurant and Respondents admitted liability on the claim. Claimant reported to his employer and police officers that the assault was random; however, further investigation, after the FAL was filed, showed that the assault was personal in nature. If an assault is personal in nature, resulting injuries are not compensable. In re Question by the U.S. Court of Appeals for the Tenth Cir., 759 P.2d 17 (Colo.). Claimant argued that there was no statutory authority to permit an admission to be retroactively withdrawn or revoked and argued that Respondents needed to reopen the claim to terminate future benefits.  ICAO determined that case law allowed declaring admissions void ab initio and affirmed the ALJ’s Order.

Moral of the story: If additional investigation after a FAL is filed proves that the injury is not compensable, a judge can find the admission was void from the outset.