The issue of overpayments has drawn much attention in recent years.   Several claims 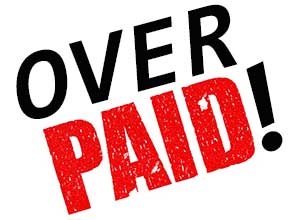 have gone up to the appellate courts regarding the jurisdiction and ability of the Division and an ALJ to order repayment of workers’ compensation benefits that were previously paid.  As you may imagine, repayment of several thousand dollars by a claimant is usually very difficult, if not impossible.  Employers and carriers usually protect themselves and recoup overpayment from future benefits owed.  Several cases have emerged, (as well as arguments from claimants), that recovery of over-payments is impermissible, unconstitutional, and burdensome.

The parties must always take into consideration that the workers’ compensation system is a gamble at every stage.   The parties often encounter substantial risk throughout the claim that could tip the scales in favor of one party or the other.  The Division IME is one such process.  Another example is a merits hearing and the ultimate determination of the ALJ.  Claimants risk that benefits paid earlier in the claim will suddenly become an overpayment based on the opinions of either a physician or a Judge, or both.

Pursuant to section 8-40-201(15.5), C.R.S., an overpayment is defined as: “money received by a claimant that exceeds the amount that should have been paid, or which the claimant was not entitled to receive, or which results in duplicate benefits because of offsets that reduce disability or death benefits payable under said articles. For an overpayment to result, it is not necessary that the overpayment exist at the time the claimant received disability or death benefits under said articles.”

Recovery of overpayments is permitted within the Act.  Many examples exist in which a claimant may have been paid money that they were not owed.  Most of the time, Respondents recoup an overpayment from PPD or future indemnity.  However, in a situation in which there are no future benefits owed, the Act allows for garnishment of the claimant’s assets upon filing of a final order with the district court.  Section 8-43-306(1), C.R.S. states, “A certified copy of any final order of the director or an administrative law judge ordering the payment of  any penalty  or  repayment  of  overpayments  pursuant  to  articles 40 to 47 of this title may be filed with the clerk of the district  court  of  any  county  in  this  state  at  any  time  after  the  period  of  time  provided  by  articles  40  to  47  of  this  title  for  appeal  or  seeking  review  of  the  order  has  passed  without  appeal or review being sought or, if appeal or review is sought, after  the  order  has  been  finally  affirmed  and  all  appellate  remedies and all opportunities for review have been exhausted. The party filing the order shall at the same time file a certificate to  the  effect  that the  time  for  appeal  or  review  has  passed without appeal or review being undertaken or that the order has been  finally  affirmed  with  all  appellate  remedies  and  all  opportunities for review having been exhausted. The clerk of the  district  court  shall  record  the  order  and  the  filing  party’s  certificate in the judgment book of said court and entry thereof made in the judgment docket, and it shall thenceforth have all the effect of a judgment of the district court, and execution may issue thereon out of said court as in other cases. Any such order may be filed by and in the name of the director or by and in the name of the party in the worker’s compensation action who was injured by the violation of any provision of articles 40 to 47 of this title  or  who  was  found  to  be  entitled  to  repayment  of  overpayments under said articles.”

It is quite difficult for a claimant attorney to explain to their client that money that was previously received by a claimant, now had to be paid back to the carrier.  For example, when a Division IME physician backdates the date of MMI, and TTD that was paid during the prior MMI period, now becomes an overpayment; a claimant is often left with the burden of understanding how a physician can retroactively find that MMI happened earlier in time.  Another example is recovery of benefits against SSDI that is being collected.  Claimant sometimes believe that they are entitled to SSDI and TTD/TPD concurrently without an offset.

Many arguments have been made to the appellate courts unsuccessfully regarding collection of an overpayment.  One such argument involves “monies due and owed at the time of payment.”  Any money paid to the claimant at the time it was owed should not be an “overpayment” pursuant to the Act.  This argument was addressed by the Court of Appeals and they declined to follow it indicating that the Act allows for repayment of monies in situations in which the money was never due in the first place.  It wouldn’t be surprising for this line of thinking to be quickly eroded by a legislative change in which an overpayment is defied expressly in the statute by other means in which the facts of a case would not change the overall intentions of the way it was written.

For now, Respondents have one-year from the date the overpayment exists or accrued to claim it.  If it is not claimed, it is considered waived.  If an overpayment of indemnity exists on a file, it is best to claim it right away and strategize with counsel how best to recoup the overpayment.  Sometimes, remedies can be worked out with the claimant to make both parties happy and ensure that there is not prejudice to either side.  It can certainly prevent an Order being granted which puts the claimant is a difficult position of having to make a repayment of monies, when in all likelihood the money is either gone and/or has a very little chance of being seen again.

If you have any questions regarding an overpayment, recoupment, or strategy regarding benefits on a claim; please contact any of the attorneys at Lee & Brown, LLC.