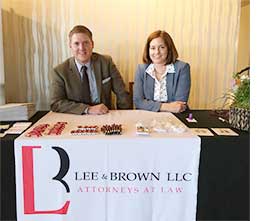 The Colorado Self-Insured Association (CSIA) held their annual membership luncheon on June 18, 2019. Lee and Brown, LLC, a professional member of CSIA, was proud to be a sponsor of this year’s luncheon. Attending on behalf of Lee and Brown, LLC were Of Counsel Bradley Hansen, Esq. and Associate Angela Lavery, Esq.   CSIA is an association of Colorado employers approved by the State of Colorado to insure their workers’ compensation benefits internally. Members include representatives of self-insured entities in both the public and private sectors, as well as other professionals involved in the workers’ compensation system. CSIA’s mission is to educate members, provide networking opportunities, and promote legislative action that maintains a cost-benefit balance. CSIA also promotes the goal of promoting timely and effective programs to return injured employees to work.

In Lasater v. Walmart Stores, Inc., W.C. No. 5-078-097, Member John M. Abraham successfully defended against Claimant’s entitlement to maintenance medical care. Claimant argued that she required ongoing treatment, after being placed at MMI, for her low back injury due to continued complaints of pain and physical restrictions.  Claimant had a pre-existing history of low back pain prior to the industrial injury. Respondents’ expert credibly testified that the Claimant’s medical records documented a pre-existing history of low back pain that was supported by objective medical evidence. Respondents’ expert further testified that her condition remained unchanged and any ongoing complaints were the result of her pre-existing low back condition.  The ALJ found that the Claimant’s need for ongoing maintenance medical care was the result of her pre-existing condition and not the industrial injury. As such, the ALJ denied and dismissed Claimant’s claim for maintenance medical care.

In Misenhimer v. Walmart Associates, W.C. nos. 5-038-861 & 5-089-956, Of Counsel M. Frances McCracken successfully defended against Claimant’s consolidated claims for additional medical benefits for her admitted right hip injury and compensability for her denied left hip injury. In 2017, Claimant injured her right hip falling from a six-foot ladder. Respondents admitted liability for this injury. In 2018, Claimant alleged she sustained injury to her left hip while lifting bags of cat and dog food. Respondents’ expert credibly and persuasively testified that right hip surgery would not lessen Claimant’s pain or improve her function and that a pre-existing condition caused Claimant’s left hip symptoms. The ALJ found that Claimant failed to prove she was entitled to ongoing medical benefits for her right hip and compensability for her left hip injury. Thus, the ALJ denied and dismissed Claimant’s request for prior authorization for right hip surgery and claim for the left hip injury.

In Benavidez, Sr. v. Xtreme Drilling Coil Service,, W.C. No. 4-952-617, Of Counsel Bradley Hansen successfully defended against Claimant’s attempt to overcome the DIME opinion regarding MMI and entitlement to additional TTD benefits. Claimant sustained a back injury while working on an oil rig for the Employer. Claimant had a previous work injury to his back but claimed all of his current complaints and symptoms were due to the injury on the oil rig. The ALJ found that Claimant’s testimony, and the testimony of his expert, did not prove by clear and convincing evidence that the DIME should be overcome.

successfully defended a full contest claim. Claimant alleged that she sustained an injury to her low back and neck when she was bumped by a housekeeping cart.  Claimant had a prior low back injury and was actively receiving treatment at the time of the new alleged injury. Claimant’s ATP and Respondents’ expert all opined that Claimant’s current symptoms were related to the prior injury and chronic pain syndrome.  The ALJ found that the accident did not create a disability or need for medical treatment and any ongoing need for treatment was related to Claimant’s chronic pain and prior injury.  Claimant’s claim was denied and dismissed.

In Comfort v. Community Education Centers, W.C. No. 5-037-333, Associate Jessica Melson successfully defended Claimant’s Application for Hearing to Overcome the DIME. In the DIME, Claimant was found to have sustained 6% permanent impairment to her jaw from a board falling on her. Claimant sought to overcome the DIME alleging she was not at MMI because she required additional treatment for her jaw. She also alleged the DIME erred because she sustained additional impairment to her cervical spine and shoulder. Ms. Melson presented persuasive evidence of the extensive medical treatment and evaluations Claimant had that found she had no additional injury. Dr. Striplin credibly testified the DIME was correctly performed and there were no errors. The ALJ found Claimant failed to overcome the DIME.

Fine, Fine Everywhere a Fine – Excessive Fines by the DOWC

Dami Hospitality, LLC., is the owner of a hotel in Denver that employs between 4 and 10 people at any given time.  Dami let its workers’ compensation policy lapse more than once. DOWC discovered the lapses and issued a notice requiring Dami to answer a compliance questionnaire and advised that Dami could request the prehearing conference over this issue.  Dami did not respond to this notification so a second notification was sent on June 25, 2014, with a compliance questionnaire and an option to set a prehearing conference.  On July 11, 2014 Dami sent in a certificate of insurance covering Dami from July 10, 2014 to July 10, 2015.

Theories Are Not Scientific Evidence: In Lorenzen v. Pinnacol Assurance, 2019COA54 (April 18, 2019)(awaiting publication), the Colorado Court of Appeals upheld a district court’s judgment in favor of the defendant-insurer against a bad faith claim brought by the Claimant.  Claimant alleged that the insurer’s denial of authorization resulted in a 13-day delay of Claimant’s spinal cord surgery causing permanent impairment to the spine due to prolonged nerve compression.  Claimant presented multiple medical experts who were generally in agreement that, while “sooner is better” is a sound medical principle when providing treatment, there was no definitive medical evidence that the 13-day delay actually caused any impairment.  The district court excluded the testimony based on Colorado Rule of Evidence 702, which requires that medical evidence be reliable, relevant and not based on unsupported speculation.  The Court of Appeals agreed, finding that because Claimant could not prove the insurer’s conduct caused impairment, he could not prove bad faith.

Moral of the story: A party seeking to prove that an insurer’s conduct caused a medical condition must offer actual medical evidence of a relationship between the conduct and the condition, not just a theory that a causal relationship is possible.

The Clock is Ticking, Or Is It?: In McGlothlen v. ICAO, 18CA0763 (April 25, 2019)(nsfop), the Colorado Court of Appeals set aside an ALJ’s Order which dismissed a claim for a work injury on the basis that the statute of limitations had run.  Claimant first reported symptoms in 2012, but did not file a claim.  The employer filed a First Report of Injury and Notice of Contest in 2013.  Instead of pursuing workers’ compensation benefits, Claimant filed a lawsuit in federal court against her employer.  The suit was dismissed on the basis that Claimant’s only relief was through workers’ compensation.  When Claimant filed a workers’ compensation claim in 2017, the ALJ dismissed on the grounds that the two-year statute of limitations had run without a reasonable excuse to extend an additional year.  The Court of Appeals disagreed, noting that the Act acknowledged a First Report from an employer as notice of a claim unless specifically objected to by a Claimant.  In the federal court lawsuit, the employer argued that the First Report was a claim for workers’ compensation, while later arguing to the ALJ that the Report was insufficient notice of a claim for purposes of the statute of limitations.  The Court of Appeals remanded to the ALJ to reconsider whether there was a reasonable excuse allowing for extension of the statue of limitations under the facts.

Moral of the story: By creating a First Report of Injury, an employer acknowledges that an employee may have reported a work injury and therefore, this may be considered a “notice claiming compensation.”  Arguing that a First Report is notice in one court proceeding, while denying it in another, will not help your statute of limitations defense.

Tortfeasors Can’t Reap the Windfall: In Scholle v. Delta Air Lines, Inc., 2019COA81, 18CA0049 & 18CA0760 (May 23, 2019), a division of the Colorado Court of Appeals reversed the district court’s admission of evidence of the amount of workers’ compensation benefits paid by the insurer. The injury at issue arose from a collision between William Scholle, a United Air Lines employee, and Daniel Moody, a Delta employee, during the course and scope of the two men’s respective employment. United Air Lines, a self-insured employer, settled its subrogation interests with Delta. Mr. Scholle initiated a personal injury lawsuit against Delta in district court, and the case went to trial to determine the amount of damages Mr. Scholle incurred. The trial court judge allowed Delta to present evidence of the amount of workers’ compensation benefits paid because the trial court held that the collateral source rule did not apply. Under the collateral source rule, evidence of payment by a third-party or collateral source, typically an insurance company, cannot be admitted. The purpose of the rule is to prevent the tortfeasor from benefiting from the payment by the collateral source. The Court of Appeals held that workers’ compensation payments still constitute payments by a collateral source when the insurer has settled with the tortfeasor. Thus, the Court of Appeals held that the trial court erred in allowing evidence of the amount of workers’ compensation benefits paid. The Court of Appeals reversed and remanded to the trial court for a new trial.

Moral of the story: Parties in a subrogation action cannot sidestep the collateral source rule by settling the insurer’s subrogation interests before proceeding to trial in district court. At trial, only evidence of the amount of medical benefits billed will be admitted, not the amount actually paid per the workers’ compensation fee schedule.